From RailClone 4 onwards it is possible to take the output of one generator and use it as a segment inside another, all while retaining full instancing and in the same graph. Nested Generators, allow you to connect the output of L1S or A2S node to any of the segment inputs of another generator. There’s no limit to the number of levels you can nest, allowing you to use the plugin in ways that were impossible in previous releases.

To learn how nesting works, the introductory tutorial above demonstrates the fundamental principles to help you get up to speed with this powerful feature.

Nested generators have full access to the properties of arrays further down the chain, allowing you to create sophisticated and intelligent models.

If you’re still new to RailClone, you might imagine that this is as an advanced feature, but actually, in many cases the opposite is true. Nesting generators can dramatically simplify your graphs and we recommend introducing it to your workflow early.

For example, here’s a style (based on a question from a user) that creates a hanging ornament of origami birds. Their distances from the ceiling are controlled by a spline, with the ability to randomise transforms and sequence colours.

And here are the graphs to create this in RailClone 3 and RailClone 4. 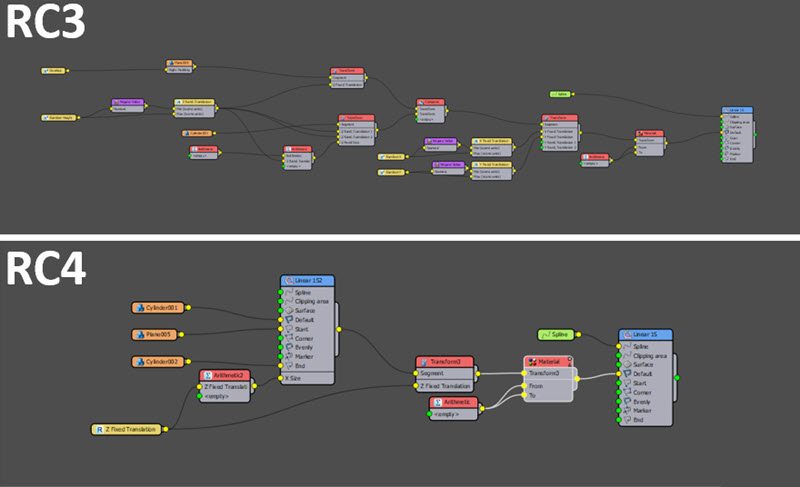 Both graphs create exactly the same geometry, but RailClone 4 uses nested generators. As you can see it has far fewer nodes to achieve the same result, and more importantly, it was much easier and more logical to create!

To nest one generator inside another

Generators can be transformed, just as though they were normal segments. To do this

To control the alignment of nested generators

It is possible to control the alignment used by a nested Generator using a Transform operator.

To use expressions with nested generators

Expressions can use the attributes from nested generators using the syntax GeneratorName.Attribute. To illustrate, in this example we will imagine we need to access the spline length to each of the 3 generators shown in the image below.