The Shadow rollout is used to define the shadow casting behaviour when using billboards. Most of these features are not applied with mesh trees.

Forest can use two types of shadows for the trees: XShadow and Raytrace.

XShadow must be used exclusively with the Scanline renderer, for other render engines as Mental Ray or VRay use the Raytrace mode.

In the Raytrace mode, Forest automatically builds some additional planes, one vertical and the other horizontal, which are used ONLY to project the shadows. By default, these planes are not visible in the viewport or rendering.

Raytraced shadows requires Forest Material to work, because this plugin does the job of hiding or rendering the shadow / texture for each plane. Be sure that the material applied to the Forest object uses the "Forest Material" plugin as a base.

This checkbox allows you to disable all XShadow and raytrace options, and cast standard shadows just as any other object in the scene.

When enabled, this option builds a vertical texture for the trees.

Same as the horizontal shadow. The shadow mask must be defined in the "Forest Material" plugin.

Adjusts the separation of the horizontal shadow from the base of the tree. The value is defined as a percent of the height of the tree. By default it is 5%, you may use higher values if the shadow is hidden by the terrain or the bias parameter in the light is too low.

By default, the plugin casts opacity masks only for trees created from templates. Enable this option to use also on "Custom Object" trees.

Assigns the light which casts the raytraced shadows. The shadow planes created by Forest will face this light automatically. "Clear" un-assigns it. Without a raytrace light assigned in this parameter, Forest doesn't build the shadow planes. The "Copy" buttons assigns the current Light to all Forest objects in the scene.

In Mental Ray and VRay, enable this checkbox to avoid that a tree cast the shadow over itself. 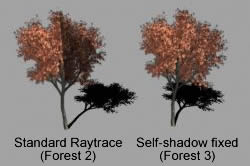 Every tree over itself

Defines how the self-shadowing detection is applied, to the full object (trees don't cast shadows to other trees on the same Forest object) or only each tree to itself.

{If you use Mental Ray, set Shadows Mode to "Simple" or "Sort", but not "Segments" (Render Setup -> Mental Ray Renderer> Renderer> Shadows & Displacement -> Shadows Mode). This mode is not supported by Forest.

If you use Mental Ray, set Shadows Mode to "Simple" or "Sort", but not "Segments" (Render Setup -> Mental Ray Renderer> Renderer> Shadows & Displacement -> Shadows Mode). This mode is not supported by Forest.