From version 5.0 onwards you can use effects to control many of Forest Packs parameters using mathematical expressions. Effects are easy to use as long as you have some basic scripting and mathematics knowledge and use the syntax rules as described below.

Effects expressions use a straightforward mathematical syntax comprising operators (+, -, *, /, etc.), mathematical Functions that take one or more arguments and return a result, FP's built in variables (which we have called Attributes for clarity), user declarable Variables, and customisable Parameters that are editable from the Effects rollout panel.  There are many built in functions, and attributes already available and these are all documented in the Command List on the left hand side of the Effects Editor. To see an explanation for each entry, single click on it and a description and example syntax will display in the Help pane at the bottom of the interface. General syntax rules are describe below.

Functions provide pre-built commands that can be used to perform common mathematical expressions. To use a function you use the name followed by any required arguments enclosed in parenthesis. For example, to convert 90 degrees to radians you use the degToRad function as follows:

Where a function requires multiple arguments, these should be separated using commas. For example to generate a random integer between 0 and 350 you would use the randomInt function as shown below:

Functions can also be nested by including them as arguments, for example:

You can find a full list of supported functions, including information about the arguments they require here.

Attributes are Forest Pack's pre-defined variables. Dot syntax is used to access an attribute's values. This means that when using an attribute, the statement must always start with a reference to some object, followed by a full stop (. or dot) and then the name of the property you wish to access. Each dot represents a move from more general access to the object to more specific levels of parameter detail. For example fpItem refers to the the entirety of the Forest object, whereas fpItem.position accesses the local coordinates of each scattered item. Continuing down the hierarchy, fpItem.position.z refers only to the items position on the Z axis. Dot syntax is also used to access the position coordinates of Object parameters and the components of vector variables.

To assign a value to an attribute you use equals (=). For example to set the Z rotation of all scattered objects to 45 degrees you would enter the following:

Be aware that not all attributes in the Command List can be edited using expressions, but they can all be read. Studying the list of editable attributes is a useful first step in seeing what's possible with effects because these represent the aspects of Forest Pack that can be scripted with this new tool. A full list of attributes divided into editable and uneditable categories can be found here.

In addition to built-in attributes, variables can be created and edited in the expression script. They are declared as one of three types, either real for float values or scene units, int for whole numbers, or vectors. They are not case sensitive but there are a few restrictions on naming:

Below are examples that illustrate how to create each of the three types of variable as well as illustrating some acceptable ways to construct variable names based on the rules outlined above. Green text illustrates the variable type, blue the name, and red the assigned value.

You can also create variables without assigning a value as follows:

Once a variable has been declared, you assign a new value using equals (=). For example

If you evaluate this code then 12 will display in the output window. This is because the floor function rounds 12.3 to the lowest adjacent whole number which can then be assigned to the integer variable with no errors.

Parameters are a special type of variable whose values are assigned in the Effects rollout, this enables a user to control effects without needing to understand the code. Instead of being declared in the script like a normal variable, they are created in the parameters tab of the effects editor. 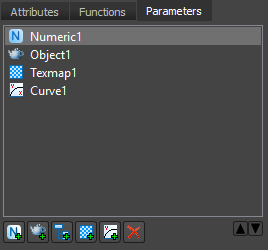 There are 5 types available which you create by clicking on the corresponding button:

Object Parameters. Adds an object picker to the effects rollout and allows you to access the selected object's position vector.

Controller Parameters. Allow you to access the output from any controller in 3ds Max, picked from the effects rollout.

Texture Parameters. Allow you to use the RGB values from a map, picked from the effects rollout.

Curve Parameters. Allow you to use a curve to control values. The curve can be edited from the effects rollout.

Use the properties section to fine tune the parameter including the type of number, minimum and maximum limits, a default value and the name. Irrespective of the type, you reference a parameter in the expression using its name and because of this, parameters have the same naming restrictions as regular variables as described above.

To illustrate here's how you would assign parameters with names as shown in the screen capture above to a new variable:

A parameter's values cannot be edited in the expression, only by changing the value of the spinner in the effects rollout or by editing the object or controller to which it is linked.

To read more about parameters and how to create and edit them, please see the parameters page.

Each command must be terminated by a semi-colon ( ; ).

Comments are added by starting the line with a # symbol. Anything after the # on the same line will be ignored:

Note that comment lines do not need to be terminated with a semi-colon, though it won't affect anything if you do so.

To help debug effects we have provided a print command that displays the results of an expression or contents of a variable, parameter or attribute to the Output window. For example

will print 5.0 to the output window.

Because you are often creating scripts designed to manipulate the values on thousands of scattered items it is not possible, or desirable, to see the results for every instance. Therefore the print command displays values for only the first scattered object

Functions, variables, properties and attributes are not case sensitive, for example fpItem.position, FPITEM.POSITION, fpitem.position, and fp.ITEM.position all refer to the same attribute.

Getting Started - A simple example

To illustrate the syntax described above it is useful to go through the steps necessary to create a new effect. In this example the we'll add the ability to specify a step increment when using the existing Transform > Rotation > Z property. To do this: